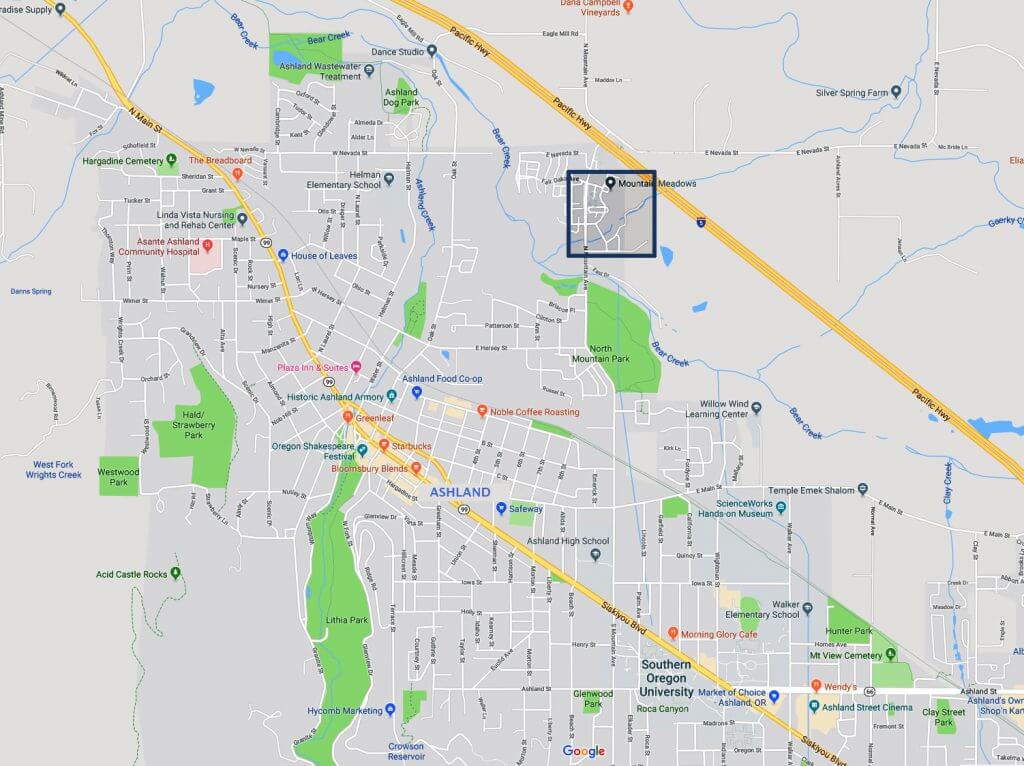 Mountain Meadows is located in Ashland, a small historic community that is grounded in its cultural and educational activities. Set in the Rogue Valley just north of the California border, between the Siskiyou and Cascade Mountains, Ashland offers a temperate climate and four seasons of rich recreational opportunities. Major national retail stores and a regional airport are available in Medford, only 20 minutes north on Interstate 5.

Ashland, Oregon, with a current population of about 21,000, is located just off Interstate 5 about halfway between Portland, Oregon, and San Francisco, 15 miles north of the California border and only a two-hour drive to the Pacific Coast. Ashland is nestled in the Rogue Valley, bordered on the east by the Cascade Mountains and on the west and south by the Siskiyou Mountains. Crater Lake National Park is a scenic 87-mile drive to the north. (City of Ashland Website)

Ashland’s cultural history is traced back to Native American tribes who lived in the valley as early as 6000 BCE. The settlement of Ashland Mills, with lumber and flour mills, blacksmiths, shops and school, was established in 1854. Ashland College and Normal School, founded in 1872, has evolved into the liberal arts, ecologically oriented Southern Oregon University. The Southern Pacific Railroad linked its north-south route in Ashland in 1887, bringing the city to life, but when the railroad moved the route to Klamath Falls in 1926, the city went to sleep, preserving its beautiful turn-of-the-century Victorian homes and business district.

Angus Bowmer, a professor of English at SOU, established the Oregon Shakespeare Festival in 1935 literally on the foundations of the Chautauqua Assembly that had flourished from the 1890s to the 1920s, bringing Ashland back to life. Today it is a welcoming year-round mecca of culture, with world-class theater, music, film and art festivals, award-winning cuisine and outdoor activities for all ages and abilities.

Shopping in Ashland is a sensory experience – from locally owned boutiques and retail shops to outdoor arts and crafts and farmers markets. The city has a variety of grocery stores, pharmacies and hardware stores. Medford, an easy 11-mile drive up Interstate 5, is the Rogue Valley commercial center, with national retailers including Costco, Walmart, Macy’s, Lowes, Office Depot and Trader Joe’s among many other stores and services.

The beauty of our outdoor environment changes as we enjoy Ashland’s four moderate seasons. Springtime comes with an explosion of growth, summers have low humidity and little to no rain, fall is colorful and winter brings snow in the mountains that only occasionally reaches the ground in Mountain Meadows. With our inland location and surrounding mountains, we enjoy an average of 185 days of sunshine each year, with about 20 inches of rain and a few inches of snow in Mountain Meadows each year.